“Are you ready for the pain?” 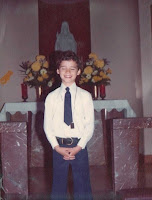 The fourth grade was no treat for me. I was a skinny kid then (hard to believe looking at me now), debilitatingly shy (again, hard to believe) and a constant daydreamer (which placed me on the low end of average when it came to academics). Compounded by the fact that I was new to Good Shepherds Catholic School in Beverly Hills, Calif., and of course you’d end up with an awkward kid like me, right? As a result, I spent a great deal of my early scholastic career avoiding being picked on. (That’s me to the left.)

The only classmate who had a more difficult time than I did was a boy named Steven, who had the misfortune of being nearsighted, a straight-A student and overweight. He just happened to draw more negative attention than I did. Even at an early age, I quickly learned that my best defense against the school bullies was to stay within range of Steven. Who’d want to pick on me when they had Steven nearby to pick on instead?

It was at the tender age of 9, while staying in range of Steven, that an event – one that would teach me a lesson I would never forget – occurred at recess. The school bully, Calvin Coolidge, decided he’d gather a group of boys, including Steven and me, to play a game of circle. It was a pretty simple game. Everyone stood in a circle and, at the whistle, all tried to push one another out. The last one left (usually Calvin) was the winner and dubbed the “boss” of the playground.

I was usually one of the first kids to hit the asphalt outside the circle, and this day was no different. Steven, on the other hand, found a nice position in the center where he stood, immobile and terrified with his arms crossed hoping nobody would notice him. The game progressed quickly. Many scrapes and bruises later, everyone found themselves looking in from the outside of the circle. Everyone, that is, except Steven and the meanest, toughest, most freakishly over-developed boy in the school, Calvin.

In kid terms, Calvin was out for blood. He circled Steven, looking him up and down as he panted, sweat dripping off his face.

“You’re next fatty,” Calvin repeatedly said. “Are you ready for the pain?” Steven steadied himself. “Here it comes,” shouted Calvin. Calvin charged at Steven, bounced off of him and hit the ground as if he were made of rubber. Steven didn’t budge – not even an inch.

This is when something strange began to happen. We all realized that Calvin may have met his match. He continued to try to push Steven out of the circle, but, still, Steven would not budge. My classmates began chanting: “Steven! Steven! Steven!” It was then Steven opened his eyes for the first time since the beginning of the game. As he looked out over the crowd – a sea of kids and a nun – that had gathered to watch and cheer him on, the look of fear quickly switched to that of confusion before slowly shifting to one of confidence. Steven crouched, placing one hand to the ground, faced Calvin, charged and knocked him out of the circle with force. He was victorious.

Steven was the hero of the day, the “circle king,” the center of attention, and stood taller than I’d ever seen him. Actually, we both stood a little taller that day. And although Steven eventually went back to being the “fat kid” others would pick on, he no longer cowered. He faced his tormenters, perhaps not with the dramatic flair he displayed that afternoon in the circle, but enough to where his days at school became much more bearable. I still hung out with Steven at the playground, not because I feared Calvin, but because I respected Steven.

You never know where inspiration will come from. And you never really know what is possible until you muster up the courage to face challenges or people who torment you. Now, whenever I’m faced with a situation that may feel impossible or intimidating, I face those fears and think of Steven and Calvin. I knock the problem out of that circle because that circle is mine.

Alex Raffi is a partner and the creative director for Imagine Marketing.
Contact Alex at araffi@imnv.com