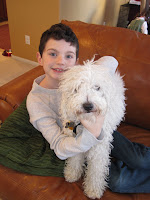 A few weeks ago I took Aaron, our eight-year-old grandson, to the pound to pick out a new dog. I hadn’t been to Lied Animal Shelter in years. Back in the day, it was like San Quentin – a stark, smelly, disease-ridden prison where every inmate waited on death row. It wasn’t unusual to see six or seven animals stuffed into each cell. Tragic.

Today, I’m happy to report that Lied has undergone a total transformation. With more than 20 spacious bungalows, every guest enjoys a private, well-ventilated kennel on a par with those I’ve seen at private pet hotels. The animals are no longer on a 72-hour fast-track. On the day we visited, Lied housed approximately 200 dogs. Of course, Aaron and I had to check out every single one of them. Inviting a new family member into your home isn’t a decision to be taken lightly.

Leaving no pooch unturned, we systematically toured each facility, dutifully jotting down relevant details about dogs that caught our eye (and tugged at our heart). As we made the rounds, it occurred to me that dogs, like their human counterparts, are in a position to help or hurt their chances based on the way they market themselves.

Typically, the pit bulls and Rottweilers lived up (or down) to their reputations, snarling and snapping and generally letting you know they’d rip your lungs out given half a chance. As a rule, the people showing an interest in them looked as mean as the dogs. Target marketing at its finest.

Some of the smaller breeds, Chihuahuas and the like, shook with unremitting anxiety or cowered in the corner. A few managed to wet themselves. We felt sorry for them but gave them a wide berth. Desperation is never an effective strategy.

Others ignored us completely, while some appeared too eager; jumping, wagging and fawning over us like overly-attentive waiters.

After more than two hours, we narrowed our search to three candidates: Chili, a miniature pincer; Cyrus, a terrier with Bambi eyes; and a white poodle mix named Apollo. Lied lets you fill out a form and play with each dog in an enclosed grassy area. While the first two dogs were perfectly respectable representatives of their breeds, it was Apollo who showed just the right combination of playfulness and sensitivity. In a word, he was authentic. Boy and dog bonded immediately.

Twenty-four hours, $155 and one minor surgery later (minor if you’re a dog, that is), Apollo became the latest addition to our family. Although Apollo is no longer his name. (The Lied staff informed us that they name the dogs for convenience purposes; he hadn’t been called that long enough to get used to it.)

At a family meeting, we made out a list of 20 or so potential doggy monikers. Ultimately, Bo, Buddy and Valentine (we picked him out on Valentine’s Day) made the short list. Later, after going home, my wife and I learned that Aaron had chosen “Rex,” a name not even in contention. (T-Rex is his favorite dinosaur, so there you go.)

In that respect, Aaron is like some of our clients – he thinks he knows better. And you know what? He’s probably right.

Brian Rouff is the managing partner for Imagine Marketing.
Contact Brian at brouff@imnv.com