It sounds like you need a mom. [10th Anniv. Special Edition] 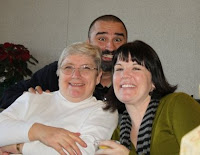 It was a dark and stormy night. Well, okay, it was a dark and stormy day, a few days into 2005, when I first stepped into the offices of Imagine Marketing. I didn’t know what I was getting into when I saw the ad in the Boulder City News – very nicely done, by the way – since it only gave a phone number for contact. So I Googled it (does anyone remember exactly when Googled became a verb?) and there was Imagine Marketing. In all its glory.

And though D.J. had started the firm just a little over four-and-a-half years before, there was glory. The Imagine webpage gave me a snapshot of the company, and having retired from working mostly in public service it was refreshing to read about real people doing real things and seeming to like it! I also found other bits and pieces on the internet about D.J., already a dynamic part of the Henderson community and seemingly an all-around good guy.

I made a phone call and spoke with the “voice of Imagine Marketing” Megan Lane. Of course I didn’t know who she was until I was invited in for an interview where I was met with her smile – and the strongest cup of coffee I’ve ever tasted. The smile continues to this day. The coffee we’ve toned down a bit.

While I waited for the team to assemble to begin the grill…er interview, I read the plaques on the wall. They weren’t the normal vanity plaques. No, they were Imagine’s mission statement and values, and by the time I read through them, I knew one thing. I wanted to be a part of Imagine Marketing.

The interview went well, as interviews go. I was nervous. They weren’t. But one thing became very clear, and a remark I made regarding that insight has followed me for half a decade. Although the team – only five of them at the time – had done remarkably well in the clerical department, when they had the time, it was time to bring in a pro. Did I tell them that? Oh no. What I said instead was, “It sounds like you need a mom.” And that, ladies and gentlemen, is why “Company Mom” is now printed on my business cards. Cards I proudly hand out to anyone who wants one. Cards that bring chuckles and sometimes strange looks when people look closely.

Do I feel like a mom? Yes and no. D.J., and then Alex and Amber were in at the start of Imagine. They began a tradition of bringing in dynamic, talented people with Ehsan and Megan, and continued to expand as time and talent permitted. Brian, Wes, Jeff, Melissa, Nikki, Beth, Gail, Morgan, all joined our team, and we’re soon going to welcome another talented professional. Many of the team members are younger than my own children, so it’s hard not to be “mom-ish” at times, but it’s a good kind of mom-thing. I get to take as much pride in the accomplishments of our team as I have in the accomplishments of my own children. And I don’t have to remind them to hang up their towels.

I don’t think there has been a day at Imagine Marketing that I haven’t felt grateful for the opportunity to be a part of this remarkable group. Chances are that I’ll retire for good in the next few years, but I’m pretty sure they’ll invite me back to celebrate their 20th anniversary. Until then, congratulations to a great company and its talented team for all that you’ve accomplished in the last ten years.

Sue Burkholder is the company mom for Imagine Marketing.
Contact Sue at sburkholder@imnv.com