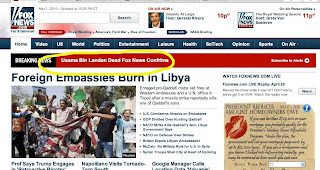 It’s pretty clear everyone has something to say about yesterday’s news announcing the U.S. had killed Osama bin Laden. I’m one to get into the spirit of things, so here’s my take on it all – from a “lessons learned” perspective.

Punctuation, grammar and spelling always matter. When breaking news happens and you’re the media, it’s important to move and move fast. Prestige comes with being first (if you’re right), and when big news happens, everyone’s jockeying for that coveted “Heard first here” designation.

Lesson learned: No matter how fast you are, it’s critical to take that extra minute (sometimes even a few seconds) and re-read what you’ve written before it goes public. If you don’t, as you can see in picture to the right, you’ll look foolish.

Be prepared to talk a lot longer than you planned. At approximately 7:45 p.m. PDT yesterday, CBS News announced President Obama would address the nation “in 20 minutes.” The news station had already confirmed (through unnamed sources) the president would announce that Osama bin Laden had been killed. However, President Obama didn’t make his speech for another hour – leaving a lot of time for CBS to kill. Given the circumstances (it was last minute and they had no idea when they would have to cut to the president for his big speech), they did a great job filling the time. That said, they repeated themselves frequently, “recapping” what had been said just minutes prior.

Lesson learned: Plan for the expected and the unexpected.

Be on time. Or plan for not being on time. President Obama said he would address the nation at about 8-8:05 p.m. PDT (if memory serves). However, he didn’t actually make his speech until somewhere in the vicinity of 9 p.m. PDT – at which time the news of Osama’s death had already spread like wildfire via social media, CBS and more.

Lesson learned: If you want to be the first to say something, keep your cards close to your chest until it’s really show time.

If you’re going to schedule your Tweets, remember to cancel them. This is a point my co-worker brought up at our morning meeting. Amidst Tweets of Osama’s death and “Go USA!” were Tweets that just didn’t fit the atmosphere of the country – Tweets that were clearly scheduled. Scheduling your Tweets is certainly helpful, especially for busy people who want to stay consistently engaged with their followers. BUT there are exceptions to the rule, and huge news is one of them.

Lesson learned: When big news hits, cancel your scheduled Tweets for that time. Otherwise, you look out of touch and, possibly, even self-absorbed.

Remember who’s the U.S. president and who’s the dead terrorist. This goes hand-in-hand with my earlier point about grammar, spelling, etc., but it’s important enough that I wanted to make it a separate point. Over the past 15 hours, countless news stations across the country have announced Obama’s death. Misspelling names is one of the fastest ways to lose credibility. In fact, it’s so important that, in college, I had a journalism professor who would fail our entire test or paper if we misspelled even one name. I would say the effect is exponential if you’ve mistakenly announced our president’s murder instead of public enemy #1’s.

Lesson learned: If there are words or names that can obviously be easily misspelled, take extra care when writing them – every single time.

Never assume nothing happens overnight. I bet the announcement of Osama’s death sideswiped the poor chap at the BBC, who politely referred to the hated worldwide terrorist as “Mr. Bin Laden.” The courtesy wasn’t up for long, but it was humorous nonetheless. This is a minor example of what could happen, but it’s worth mentioning because there are countless stories of what’s taken place (on a much larger scale) when the unexpected happened and the person in charge at the time wasn’t trained to deal with it.

Lesson learned: If you’re going to leave someone behind to hold down the fort, make sure they’re capable of handling more than the expected.

If you don’t have much to say, don’t say much (if it’s possible). One of my favorite articles last night was one by the Associated Press. The entire article went like this:

“WASHINGTON – Al-Qaida mastermind Osama bin Laden is dead and the United States has his body, a person familiar with the developments says.

“President Barack Obama is expected to make that announcement from the White House late Sunday night.

“The person spoke on the condition of anonymity in order to speak ahead of the president.”

That’s it. Short and to the point and a good example for business and life. (One of my favorites, actually.)

Lesson learned: It’s OK to stop talking if you’ve said all that needs to be said.

On that note, that’s it from me. If you have any examples of more lessons learned from yesterday’s turn of events, I’d love to hear them.