Anyone who has ever created a logo — or worked on a team brainstorm to create branding or visual messaging, as we do here at Imagine — gains a finer appreciation for these distilled bits of corporate identity. Our modern world is peppered with them, and communications pros tend to notice nuances and choices made by the creators behind so many familiar logos. Like wine snobs picking out aromas and flavor notes in a rich cabernet sauvignon, we will have something to say about every little detail. The best logos appear simple, yet evoke complex ideas — a time in history, a mood, a memory, a desire.

And we certainly all have our favorites! I stand in awe of some of the award-winning logos our Design and Development team here at Imagine Communications has created. The BlindConnect logo is a feat of thoughtful design because it must visually represent things associated with impaired vision. The final piece brings together Braille, the training blindfold used at BlindConnect and high-contrast colors best suited for those with limited vision.

That example illustrates a logo project with specific consumer accessibility needs, but let’s expand our scope, and take a look at something a bit more — well, a bit more “out of this world.”

Few government agency logos have become as well known and beloved as the two designs that represent the National Aeronautics and Space Administration, or NASA — these logos have been given the endearing nicknames “meatball” and “worm” by NASA insiders and logo enthusiasts.

The circular blue “meatball” image was based on the original NASA insignia, which NASA employee James Modarelli simplified in 1959 (the second year of NASA’s existence) into the enduring red, white and blue symbol most of us are familiar with today. The logo manages to represent quite a bit in its limited space: a field of stars, an orbital motion and a red vector shape evoking flight all surround the bold, white NASA letters. With key concepts represented so economically, it’s clear that engineers had a big hand in the meatball. It even reminds me of the sparse illustrations on the Pioneer plaques as well as the gold records aboard Voyager 1 and 2, created in hopes that some future spacefaring beings, centuries or millennia or eons from now, might be made aware of the species who built those space probes. Talk about an ambitious communications project!

As the news of moon flights gave way to disco and sleek modern art, NASA and other agencies decided to update their looks. This was also an era when America itself began to realize good design was part of a national identity and should be made a priority.

1975 removes all but the four letters — and even the crossbars on the A’s are stripped away in the smooth, rounded “worm-like” typeface. Technically a logotype rather than a logo, the worm was designed by Richard Danne and Bruce Blackburn as part of the Federal Graphics Improvement Program funded by the National Endowment for the Arts.

“Our country was somewhat immature, compared to older more established societies where design was entrenched,” Danne later said, remarking on how good design became good politics in the 1970s. “We felt this was ‘important work’ and were willing to invest excessive hours and energy to improve the nation’s public face, enhance the agencies’ esprit de corp, and support and improve federal efficiency.”

This version endured for nearly two decades but was retired in 1992, as the meatball was brought back as NASA’s official logo. Hey, it’s hard to beat a classic.

Deconstructing and appreciating popular logos isn’t just fun, it helps inform how we can create branding and all types of communication for clients, relying on simple elements for maximum impact.

And don’t even get me started on the genius of the Star Trek logo! 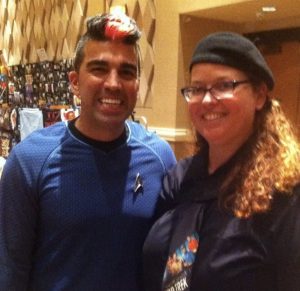 Celestia Ward is the PR coordinator at Imagine Communications and a lifelong space and sci-fi nerd. She has managed to accidentally meet Bobak Ferdowsi — the NASA engineer and “mohawk guy” made famous during the Mars Curiosity Rover mission — no less than five times, and will brag shamelessly about this at any given opportunity.