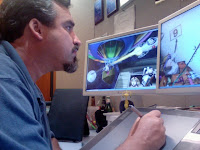 Mastery of any skill comes from the vigorous and consistent practice of it and having the opportunity to immerse yourself in it as much as possible. I think that everyone, EVERYONE, has greatness within them.

Greatness is not a thing that is granted at birth, in my opinion. I am a pretty good artist – not great by any stretch of the imagination, but still I’ve often had people say to me, “I wish I could draw like you.” The fact is that if they would have spent the hundreds of hours I have, and still do, drawing or creating art in general, and if they had had the fortune of living in the nurturing environment that saw that kind of creativity as a strength, they would be as good – if not better – than me. I would be hard-pressed to think of a day since I could hold a pencil that I didn’t do something artistic or creative. My need to constantly experiment creatively is insatiable.

In the book “Outliers: The Story of Success,” by Malcolm Gladwell, it is suggested that a big reason for the success of the Beatles was the time they spent playing together as a coherent group in front of an audience. Before ever setting foot in America, the Beatles went to Hamburg as teenagers and played as the house band doing eight-hour sets seven days a week for months at a stretch. This experience must have given them the time and experience needed to discover what people liked and disliked most about their music, allowing them to develop a refined view of their strengths and weaknesses as a group. They put in the time and work necessary to achieve the sounds that made them a success. It’s a thing that is developed not only through hard work, but also by their environment, opportunity and people around them.

Gladwell also discusses a notion known as the “10,000-hour rule,” the idea that any kind of cognitively complex discipline can be mastered almost without exception as a result of logging at least 10,000 hours of intensive practice in that skill. I have always considered talent in any field to be like a muscle. The more you do anything, the more likely you will be to understand the dynamics through trial and error or analysis of the processes. I am willing to bet that the world’s greatest artist – someone who would capture the imagination of millions and produce artwork that inspires leaders of nations to end poverty – is sitting in the untapped mind of a young girl living in poverty without access to clean water, let alone a paint brush or a computer.

If we believe that each of us holds that kind of potential and make the effort to bring it out in one other, can you imagine the greatness we’ll achieve for our future generations? I often use this metaphor to try and explain my ideas on creativity: I see the mind as a huge hall of rooms. Every room contains the ability needed for any particular skill. These rooms exist in all of us. Some of us are born with the doors to some of these rooms wide open. Some are closed and others are locked, but not impenetrable. Gaining greatness in the skill associated with that room requires accessing it first. Then living in it for a very long time. Going forward and helping build a better world for our future generations requires us to tap into our own greatness and live there for a while.

The potential is endless for the person who 1.) understands that they have the ability to do anything they are willing to put the time into and 2.) puts in the time needed to achieve their goals. That coupled with the love and support of the people around them is the best formula for achieving greatness.