I only eat McDonald’s in October. Well, that’s not entirely true, but 95% of the time, if I’m pulling up to the drive-thru, it’s October. 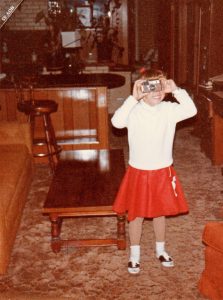 When I was a kid, my dad would take a deer hunting trip every year for 10 days or so. It was always in October, often during Halloween, and during that time, Mom would take us to McDonald’s for the Halloween bucket Happy Meals.

So, the little twinge in the back of my head — a craving, you could call it — for a Happy Meal in October is somewhat Pavlovian. But it’s also marketing.

I’m not a big McDonald’s eater, but on Oct. 18 (the official release date), I went through said drive-thru to once again get a Halloween bucket Happy Meal from McDonald’s. Call it nostalgia. But it was nostalgia fueled by marketing.

The buckets debuted when I was 11 years old and continued throughout my childhood. There were three every year — a ghost, witch and jack-o’-lantern (sometimes with multiple face choices). They were a part of my younger sister’s childhood, too, and she’s nearly nine years younger than me. The marketing McDonald’s invested in during the late ‘80s and early ‘90s is still paying off in 2022.

Evoking a feeling in someone is what marketing inherently does. You feel something, so you respond to it. If it’s a nostalgic item, triple-word score, because nostalgia is all the feelings tenfold. The Halloween bucket release this year reminded me of my parents’ 1975 Cadillac and its maroon pleather seats, the crispness in the air during marching band season, celebrating Halloween off from school (thanks to Oct. 31 also being Nevada Day), racing to find a last-minute costume with my neighborhood friend, and taking my little sister trick-or-treating when I was far too old to go alone.

I got all of that from an orange, plastic bucket with an angular, yet familiar, smirk. 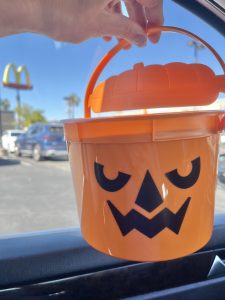 Marketing isn’t always about how a potential customer feels about your product or service right now. It can be about how they felt about it a decade ago or how they’ll feel about it in the future. Finding the heart in your marketing campaign creates positive outcomes, even if someone feels something for a fleeting moment. Because at the core, even under the mass-production, corporate golden arches, it’s still an emotional and nostalgic world.

Tiffannie Bond is the public relations director at Imagine Communications and received the jack-o’-lantern Halloween bucket on opening day of the two-week McDonald’s promotion.