Vintage marketing: You got chocolate in my peanut butter 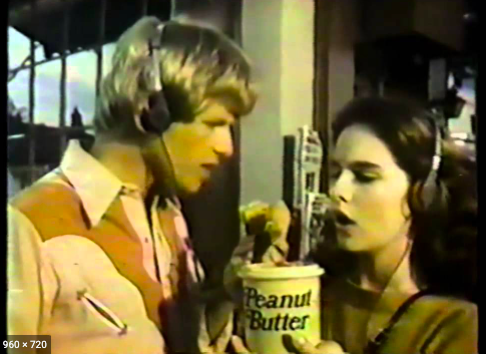 Few ads encapsulate an idea so well that they became standalone metaphors. But when I hit upon a surprise great combination, I often quip, “Hey, you got your chocolate in my peanut butter!” And whoever I’m with quips back, “You got your peanut butter on my chocolate!”

Picture this: two young, attractive people are walking along the crowded city streets, one gnawing on a chocolate bar and another eating peanut butter out of a jar. Rounding a corner, they crash into each other and accidentally create the taste sensation of eating chocolate and peanut butter together.

If you’re over 35, you know the classic ad (released in 1981 and produced by the New York agency Ogilvy Mather, by the way). You can hear the young woman and the young man initially whine about the accidental snack combination, neither able to hear the other thanks to the latest in 1980s Walkman technology.

Hold on though, a woman is walking down the street eating peanut butter out of the jar? Even today, most people commenting on the YouTube video state some form of “Omg, WHO DOES THAT???”

This is what Alex Raffi, our creative director, calls an “interruption.” It’s some kind of joke, absurdity or contradiction that makes our brains pause. Then we fixate, and we remember the ad. We might even make fun of it (in grade school, like I did, or in YouTube comments, as Gen Zers are apparently now doing).

And then we come to love it.

There are plenty of other nostalgic reasons to love this ad: corny acting, endlessly feathered hair, upbeat jazzy music, a hint of budding love between the two characters — heck, even the risqué connotation of a young man dipping his bar into a young woman’s jar. It also suggests peanut butter and chocolate is some wild, new combination, although it’s been an American classic since the early 1900s (again, providing an interruption as we think on that).

The campaign made Hershey’s even more successful and Reese’s Peanut Butter Cups the top-selling candy in the U.S., and the brand became synonymous with the peanut butter-chocolate combination. Other candy companies make similar confections, but can you name any?

More ads followed. One showed two boys playing a home video console and crashing their digital peanut butter and chocolate together. Another over-the-top production shows the collision happening with opera performers, as the conductor shrugs at the diva’s unexplained habit of eating a giant jar of peanut butter on stage. In 2006, Reese’s harkened back to the strolling teens with a tongue-in-cheek reboot to introduce Reese’s caramel cups, starring NASCAR Reese’s car driver Kevin Harvick and Brazilian IndyCar driver Tony Kanaan.

What many don’t know is that the hapless headphone-wearing teens bumping into each other was actually not the first in the series. In 1972, the first such ad featured a father tripping down stairs and dropping chocolate into a jar of peanut butter his son was snacking from. Now, it may be because I hadn’t been born when that version aired, but for me the first version is more “meh” then memorable.

A kid eating peanut butter on the stairs isn’t weird, it’s a Tuesday. Two family members sharing the resulting mix is likewise nothing odd. But two strangers colliding on a city street? Why is she eating a jar of peanut butter? Why would they eat the resulting concoction, with a strangr’s germs all over it? What the…?

In that later commercial, the interruptions have been ratcheted up.

When an ad, marketing effort or campaign can make that same impact, it stands a chance of being successful. A little of the absurd — a little interruption — can go a long way.

Celestia Ward is a public relations coordinator at Imagine Communications as well as a cartoonist, podcaster and connoisseur of all things ‘80s (the more absurd, the better).

Previous Post
Have you ever seen the turquoise arches and craved a hamburger?
Next Post
Web World Vocabulary 101